So why are those yellow jackets so mean? 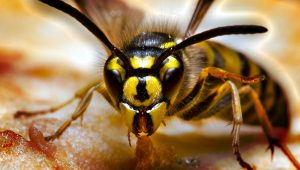 This is not your friend!

In Ohio, most yellow jacket colonies are becoming more aggressive this time of the year.  In late summer and early fall, a yellow jacket colony is at its largest (1,000 – 4,000 workers). Next year’s queens and males are being produced even as the workers begin dying off.

So should you be concerned if they are going to die this winter anyhow?

Well, there are some good reasons to eliminate yellow jacket nests, even late in the season.

Eliminating next year’s queens before they leave the nest will help eliminate future nests. These future queens don’t go far to overwinter and may start spring nests in the same general area (including in your attic or walls).

And if yellow jackets are interacting with pets or people late in the year, they are likely to come into contact more often and the chance for a bad outcome increases dramatically. Leaving yellow jackets alone is never worth it if it puts sting-sensitive individuals at risk.

We're not around right now. But you can send us an email and we'll get back to you, asap.